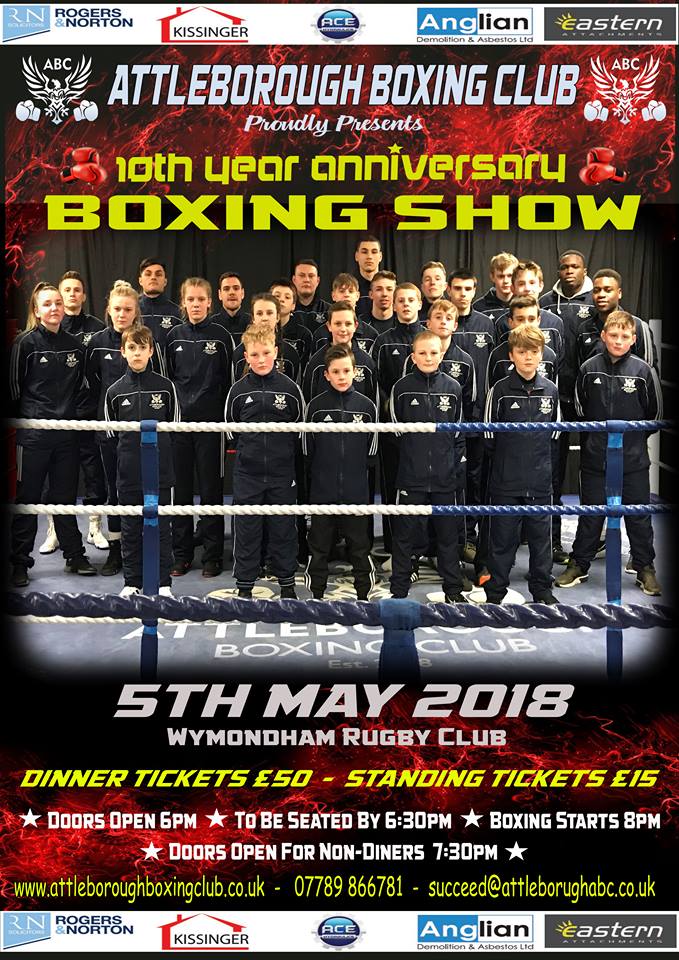 The annual boxing show was held at Wymondham Rugby Club on Saturday 5th May.  As part of the 10th Anniversary celebrations for Atteborough Boxing Club we were fortunate enough to have boxing legends Derek Sweet D Williams, Francis Ampofo, James Cook MBE and Jason Matthews to join in the celebrations.

Attleborough Boxing Club is now the 4th biggest club in the country which boasts just under 1000 members varying from ages 5 right through to 6O+.  We have members travelling over 40 miles to benefit from the excellent facilities that the club has to offer and are proud to say that we now also have squad boxers Tommy Fletcher and Lydia Nagle boxing for England and with many other squad boxers entering major tournaments throughout the country we

expect other to join them very soon.

To start the night off there were also 3 Skills bouts which allow the newer boxers the opportunity of competing on a big stage, there is no winner or loser in these as its about building the confidence up and show casing the skills that have been learnt, the competitors in these rounds were, Finn Harris (ABC) who fought Rushann Raja (Peterborough Police), Will Friedman (ABC) v Sharoz Raja (Peterborough Police) and Shane Price (ABC) v Shaun Herber.

Out of 15 bouts we had 12 of the ABC squad competing. The first of the competitive bouts was Harry King-Tomlin (ABC) v Harvey Brooks (Maldon), both the lads worked extremely hard, giving some hard punches and Harry came away with a good win, to start the night off, next up was Corban Sewell (ABC) v Charlie Milton (Campol), Corban looked hungry and gave an intelligent 3 rounds of boxing and after working extremely hard to be in the show he came away with a convincing win, next up was Lewis Bolingbroke (ABC)  v Connor Dane (Peterborough Police), this was a hard fought contest and could have been worthy of bout of the night for Lewis who came away with a

convincing win,  Charlie Connaughton v Dylan Harmon (Boston) was a tough battle but Charlie managed the win on a close split decision, next up in the ring was Tyler Bolingbroke (ABC) v Jaansher Raja (Peterborough Police) these 3 rounds were full of punches and energy and once again Tyler came away with a win, the next of the ABC boxer up was Owen Bolingbroke up against Kian Taylor (Westree), this was a great effort from Owen and deserved another great win, Devon Lockwood (ABC) v Dylan Moss ( Lowestoft) Devon has had an extremely busy few weeks with

various bouts around the country traveling as far as the Isle of Man to box for ABC, but once again, Devon worked extremely hard and not only came away with a convincing with, but also won Home boxer of the night, which obviously his sponsors Rogers and Norton where really pleased about,  Lewis Nagle (ABC) was up against Muhammed Khan Perz (Peterborough Police) the first round started off extremely quick with a great battle which continued through to the second and third round which meant Lewis had a great win, next up was a bout which didn’t involve the squad from ABC  Sam Dawson (St Mary’s) v Louie O’Doherty (Essex Uni) this was a very even bout and saw Sam coming away with the win. The first of the Senior bouts was Levi Dennis club

result ended up with a win for Levi, next up was Jack Salisbury (Westree) –v- Dhuntanu Brag (Campol) this was close to being a knockout – Dhuntanu won , up next to go into the ring was Connor Holloway (ABC) v Lewis Southgate ( St Mary’s) Connor charged at Lewis and with a cracking blow and cut Lewis which resulted in Connor coming away with the win, which is a great step in the right direction for Connor as he now moves on to Haringey, next up was Robin Mcgregor (Maldon) v Vernon Henry (Essex University) the 3 rounds were closely fought but Vernon took the bout, next was Ewortise Ezra Arenkya (ABC)  v Aron Price ( Odells ) there was lots of speed and punches, but tonight Ezra seemed not to be on top form and Aron came away with the win, the final bout of the night with his debut for ABC was Tom Collins (ABC) v Lee Scott (Essex University) Tom was full of energy and confidence and provided the

audience with a great final bout and finished the night with another ABC win.

The night was full of quality of the boxing and as a result some of the guests pro boxers are very keen to be involved with the club going forward, which is incredible and will only improve ABC and allow the club to flourish further.  Without the generosity of the sponsors and the time given up by all the coaches and volunteers, these shows would not be possible or show case what the club can offer and we would like to thank them all for all they do for the club.  There were about 450 people that came to support the show and we hope that they all had a great nights entertainment.  Thank you to everyone that was involved and attended to make it such a great night.

Colin Kilby Club chairman, said that the show took a massive amount of organizing, but it was all worthwhile when you saw the look on the faces of all the youngsters that took part and had been the best show ever that ABC had put on where all the boxers had stepped up to the next level, and was fitting for its 10th anniversary that they all performed so well, he also wanted to thank all those sponsors that made the evening possible and is already starting to work on the next show at Hingham community hall on October 17th hoping  to see you all there…

Official Photographs from the evening can be found here: