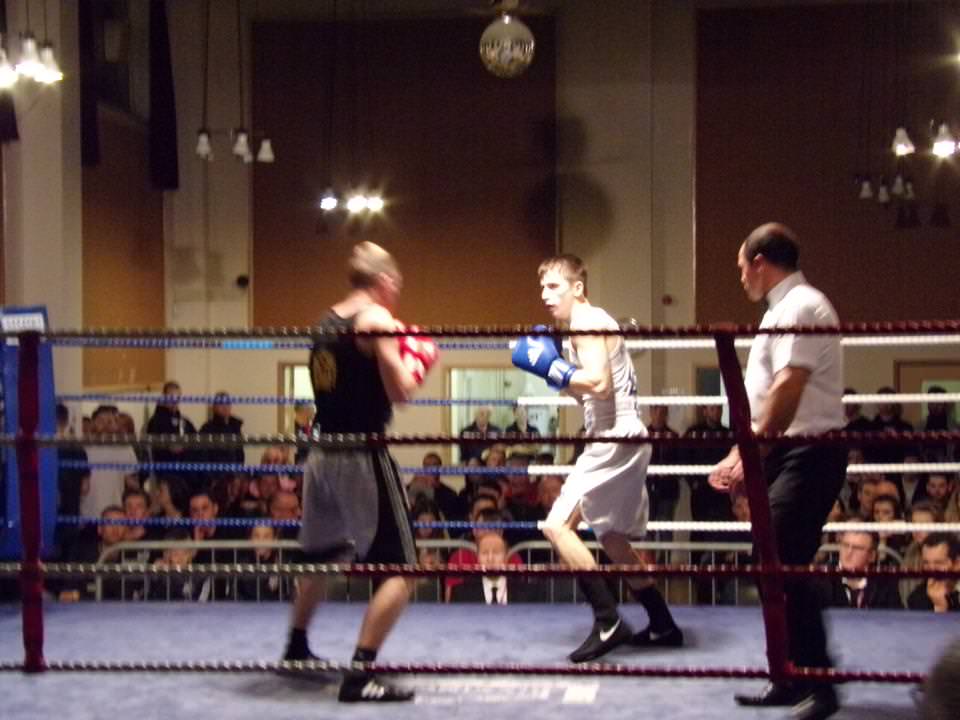 Attleborough Boxing Club entertained the community once again at their 7th Annual Spring Open Show. The stage was set for the club’s dedicated young boxers to show family, friends, and boxing enthusiasts from across the country the fruits of their sheer hard work and passion for the great sport. 14 boxing clubs from as far afield as Manchester and Oxford came along to compete against the successful club’s talented athletes.

The Connaught hall was absolutely packed and the atmosphere electrifying as 12 year old Daelarrna Blackwell kicked off the night in a great skills bout against Berinsfield’s Daniella Blake. Both girls showed great confidence and effort. Good work for 2 rounds from 12 year old Kyle McKechnie in his skills bout against Kingfisher’s Charlie Hyde, McKechnie having to dig deep in the last round as the youngster tired. Great show of strength from 13 year old Owen Bolingbroke in his first ever skills bout against Mayland’s Callum Wright.

The first competitive bout of the evening saw Colchester’s Aflie Smith challenge Attleborough’s Charlie Connaughton, some nice fast hand counters clinched Connaughton a unanimous win. A fast start and great lateral movement from Tyler Bolingbroke against Boston’s Cobey Brown as Bolingbroke followed suit to also win unanimously. After a slow start from brother Lewis Bolingbroke in his bout against March’s Acer Smith, round 1 eventually picked up pace towards the end, and the work rate continued throughout the 2nd and 3rd. Some nice work from both boys resulted in a close bout and the first win to the away corner. Outstanding determination from Lewis Nagle as his opponent Johnny Delaney from Rayne picked Lewis off with the jab. After being given a standing 8 count in the 2nd, Lewis dug deep having more success in the final round. Win given unanimously to Delaney.

Recently formed Norseman Boxing Club had their first ever competitive bout as they bought in Louis Thomas to compete against Norwich Diamond’s Dylan Shepard. The close bout saw both boys get bloody noses in a sheer battle of will and determination. A loss for the new boxer as Shepard clinched a very close split decision. Harry Burst was in good form against Kingfishers Carlos Fernandez. Nice work from both boys, Burst just beating Fernandez to the punch to win on a split decision. Lily Devlin, after a while out returned to the ring against Boston’s Angelica Finch, after the 1st round Devlin was retired from the contest by her corner. Win to Finch by TKO.

Levi Dennis came out all guns blazing in his bout against Billericay’s Joe Gonella. Dennis’s phenomenal hand speed and rapid lateral movement beating Gonella to the punch every time he came in. Dennis continued picking Gonella off with some excellent 4 and 5 punch combinations throughout all 3 rounds. A Class display of boxing from Dennis as he convincingly won a unanimous decision. Courageous performance from Attleborough’s Kieran Lancaster against Bridgewater’s Jake McMorine. McMorine dominated the bout eventually stopping Lancaster in the 2nd round to win by TKO.

A crowd pleasing bout between Boston’s Thomas Upsall and Attleborough’s Connor Holloway in the first senior bout of the evening as both boys traded big blows throughout the 1st round. Upsall getting the better of Holloway in the 2nd as Holloway was given an 8 count after hitting the canvas. The determined Holloway came out blazing in the 3rd as both boys continued landing hurtful punches. Unanimous win given to Upsall. Eurico Correia made his debut against Brentwood’s Josh Young, after a slow start in the 1st round Correia landed some heavy punches towards the later part of the round, continuing similarly throughout the 2nd. Young had a little more success landing a few of his own punches in the 3rd; Correia returning the favour showed some good potential. Deserved win for Correia as he clinched yet another home success.

The final bout of the night saw a great display of boxing from Bridgwater’s Saeed Yousif against Norwich City’s Danny Perry. After being beaten to the punch in the 1st and 2nd rounds by Yousif, Perry showed some great work in the 3rd but it was too little too late as Yousif clinched a well deserved win. The audience were also treated to a great display of skills between 11 year olds Matthew Page from Norwich City and Callum Hancock from Boston, followed by Brentwood’s 12 year old Will Booth against 11 year old Tunc Mehmet from Mayland’s. The night also saw a win for Brentwood’s Oliver Smith against New Astley’s Felix Ryan, a win for Colchester’s Molly Yates against Bridgwater’s Chloe Griffith and a win for Billericay’s Connor Bishop against Kingfisher’s Dylan Parker. Bout of the Night was awarded to Holloway v Upsall. Holloway also awarded Home Boxer of the Night and Away Boxer of the Night went to Bridgwater’s Jake McMorine.

Head coach Jon Dennis said ‘It was another well attended and well supported show, thanks to all clubs that attended especially those that made the long journeys. Stand out performance on the night was from Levi Dennis. We are now looking forward to our inaugural dinner show on May 14th’.
The appreciative club would sincerely like to thank everyone for the tremendous support.