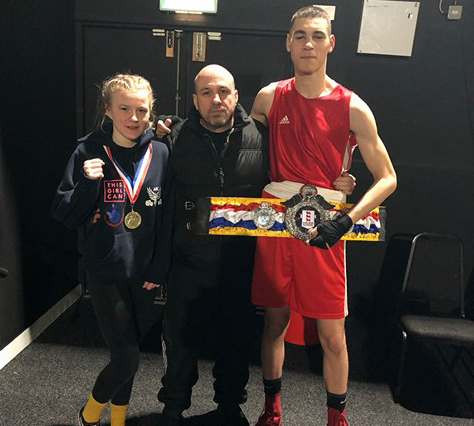 TeamABC travelled upto Rotherham for the England Boxing National Junior Championships final weekend where Lydia Nagle would be competing in the Class A female 50kg and Tommy Fletcher in the Class B Male 70-75kg. Leaving Attleborough Friday afternoon the team travelled up north in preparation for such a colossal weekend ahead and after a good night sleep in a nearby hotel made their way to the venue early Saturday morning for the all important weigh in and being declared fit to box. Both bang on weight and passing the medicals it was now a time for waiting and preparing mentally for the job ahead.

Five hours later and Lydia ‘Socks’ Nagle was stepping into the ring for her semi-final bout against a good boxer from Islington. Despite her lack of experience (this being only her 4th competitive bout!!) Lydia showed no sign of any nerves and made sure all the weeks of intensive training and preparing for this competition was never going to be wasted. She came out for the first round boxing really well and pressurising her opponent for the majority of it and even though there were good exchanges between the two ‘Socks’ finished very strongly with some great punches to edge round1. Gaining in confidence Lydia came out in round 2 very strongly with some powerful punches and great combinations and movement really dominating the round, her opponent showed her worth by getting back into the fight but the power and accuracy from Lydia was now so great the referee was forced to give the Islington boxer a standing eight count just before the sound of the bell to end the round. The final round and Lydia started where she left off and after just 15 seconds and a powerful right hand that sent her opponent stumbling across the ring gave the referee no option but to stop the bout and award Lydia the win. So with Socks now in Sundays final it was Tommys turn to try and emulate his teammates achievement and join her.

Tommys opponent from Guildford was a good boxer and in round 1 Tommy struggled to find his range or get in any sort of rhythm, allowing his opponent to dictate the pace and apply pressure going forward. We needed a better round 2 and Tommy began to show what he is capable of and used his long powerful punches to good use imposing his authority in the bout and with better movement forcing his opponent to miss also. Everything depended on who would win the final round. The Guildford boxer started the round well but Tommy showed his class by coming back once again picking his opponent off with some great boxing and with the very last punch of the bout sent his opponent to the canvas with a fantastic rear hand shot to the head ending the contest with a standing eight count. The judges also saw it as a close bout and by the way of a split decision Tommy was awarded the win and would make it to Sundays final.

Back to the hotel to recharge and enjoy a relaxing evening then having an early night ready for the biggest day of their boxing careers. It wasn’t long before it was Sunday morning and we were back at the venue all weighed in and ready for the day ahead.

Lydia would be the first to box for the title against a very good boxer from Bletchley. Both girls boxed very well in the opening round but it was Lydia who had the better of the round landing more quality punches as well as showing a good defence. Into round 2 and both boxers giving it their all and exchanging a flurry of punches but again Socks finished the stronger of the 2 with some good composed boxing. The final round was once again an explosive round where both boxers were giving it everything they possibly had showing great desire and determination as well as good boxing skills showing them both to be worthy finalists. The final bell ended a even round 3 and great contest before everything went to the judges scorecards. Deciding the winner by the way of a split decision the Class A female 50kg National Junior Champion was………….. LYDIA NAGLE !!!!!!!  The popular and likable young lady who unbelievably only had her first skills bout 6 months ago had just shown everyone what a great talent she is and will undoubtedly have a fantastic career ahead of her.

Could Tommy make it a double for ABC ? He had to beat a quality boxer from Warrior Breed Boxing Club, West Yorkshire who already was a experienced England boxer. Tommy entered the ring confident in his quest for glory and looked impressive in the first round showing good footwork and body movement and landing more punches than his opponent. The tempo raised in round 2 with both boxers landing some good shots and both showing their obvious talent in a boxing ring in a great boxing bout. With either unable to dominate, round 3 was going to be a big round for them both in deciding who the winner would be. The final round once again was even with very little between either boxer in a very tactful contest. So everything was in the judges hands and the winner was announced by the way of a split decision …….. TOMMY FLETCHER !!!! The respectful young man had done it and was declared the Class B Male 70-75kg Champion as well as making it onto the England Boxing talent path.

What a fantastic weekend for ABC where 2 of their youngsters had just been crowned National Junior Champions in performances that everyone was so proud of and worked so hard towards. Not too bad for a boxing club in the middle of the countryside!! but one where these results match the ambition of Attleborough Boxing Club.

Well Done Lydia and Tommy on such great results and achievements 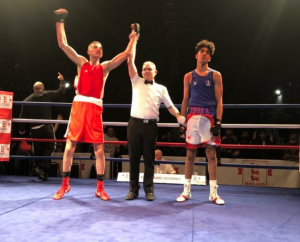 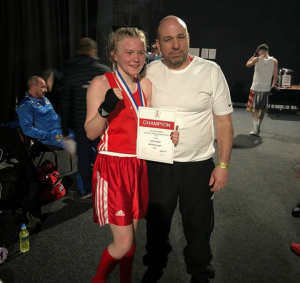 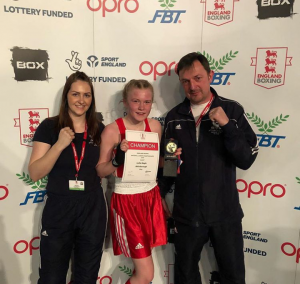 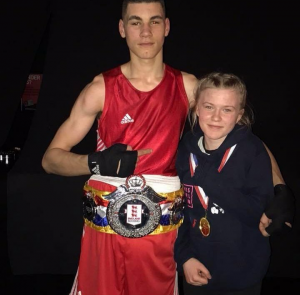