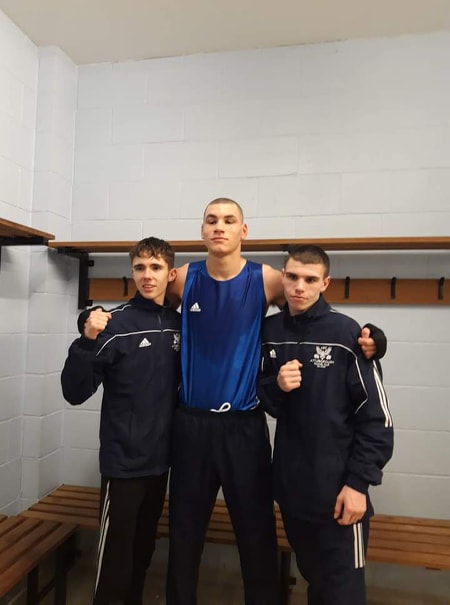 TeamABC headed to Sudbury for an evening of championship boxing. Three of our boxers would be competing for the Eastern Counties title in the Youth Championships latest round of the national competition.

First to represent ABC was Frankie Bacon boxing against an opponent he knows well. Our boxer started very well with a great display of boxing in the opening round taking an significant and early advantage in the bout. With his opponent coming back stronger in the second round Frankie was once again a good match producing some good boxing and looking comfortable in a good round of boxing. The final round went to his opponent but it was too little to late as the Diamond Home Maintenance sponsored boxer won the bout by a split decision and in doing so becoming the Eastern Counties champion in a great start to the evening for TeamABC

Owen Bolingbroke was next to box for ABC against a strong and worthy opponent. Boxing very well from the start our man looked sharp and started picking his opponent off with some quality punches. Despite his opponent not giving an inch for the whole bout and proving his fitness levels and boxing skills the Eastern Attachments sponsored ABC boxer kept up his own high performance levels to dominate the bout going on to record a unanimous points victory and become another Eastern Counties champion for TeamABC

Last bout of the night featured Tommy Fletcher who had moved up a weight category. Many spectators stayed till the end of a long evening to watch this bout as it was Tommys first local(ish) bout in over 2 years! With the pressure on to perform and adjusting to the heavier weight class Tommy started the bout slowly working his way into the contest and it wasn’t until round 2 when Tommy really started getting into his rhythm punishing his opponent with some big punches that sent him crashing to the canvas. Despite getting back and carrying on it was clear to see the end was in sight and the referee quite rightly stopped the contest. The Rogers and Norton Solicitors sponsored boxer had made it a hatrick for TeamABC resulting in another Eastern Counties champion.

This weekend the Eastern Counties champions face the Southern Champions in Dagenham to try and make it to the final weekend of the England Boxing National Youth Championships.